#1 Bold and the Beautiful Predictions: Brooke Logan Wastes Every Time

Brook Logan continues to stick her nose into the saga unfolding at the hospital but she doesn’t have to. B&B predictions say what Brooke Logan does in upcoming episodes causes even more damage to her marriage.

Brooke makes a fool of herself by starting a battle with Taylor Hayes (Krista Allen). Ridge Forrester (Thorsten Kaye) will see Brooke in action and become tainted with his wife. 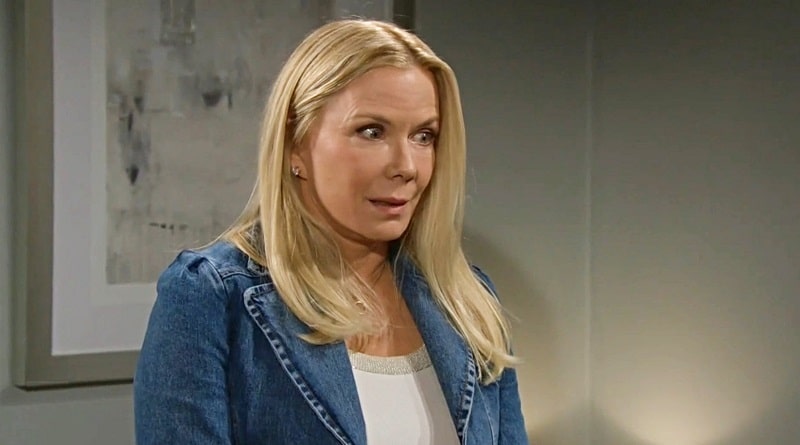 But a marriage demise for Brooke and Ridge is most likely temporary. Once the truth about the shooting surfaces, things may change.

So, Bold and the Beautiful say predictions Brooke Logan will find out that there was no need to worry. That comes soon when Steffy’s plan surfaces.

While Steffy Forrester continues to say Liam Spencer is her husband, it appears she knows he’s not. But recognizing Liam as her husband seems this is her way to have people believe her memory is still gone.

This week she remembers Finn but still has no recollection of John Finnegan (Tanner Novlan) being shot. B&B Predictions have Brooke gathering her troops next week.

Before the day comes when they realize Steffy has no designs on Liam, Brooke has done too much damage. She may find Ridge at his wit’s end with her. 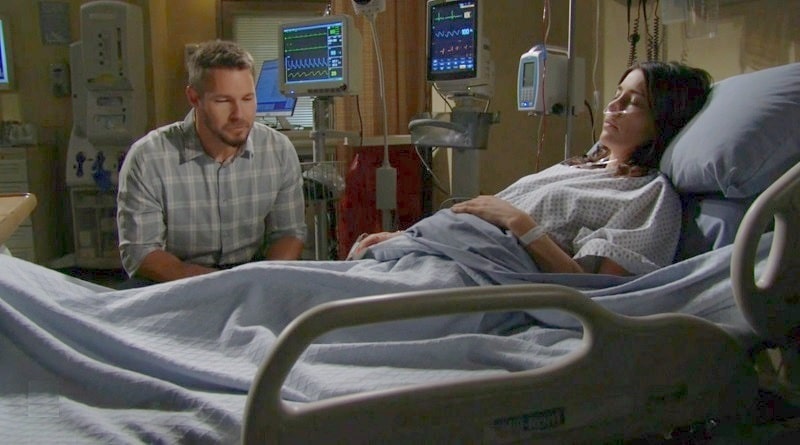 It looks like her memory comes back next week on Bold and the Beautiful. But she might not let on that it has about the shooting.

Still, she may incorporate Liam Spencer into her plan without him knowing this only for a while. Then when her mom and dad tell her she was married to Finn, she remembers him. This lets Liam off the hook.

The widow needs to have people believe her memory is gone for what’s predicted next. This raises havoc in the hallways outside her hospital room.

Brooke, Hope Logan (Annika Noelle), as well as Liam aren’t happy with the role-playing. But Steffy may make a plan while lying in her bed.

Many hints were dropped last week on B&B about Steffy Forrester’s future. First of all, everyone sang her praises for the strong woman she is and how protective of her loved ones she can be.

Well, it looks like the widow Forrester is about to pull from those resources in upcoming episodes. While she had a loss of memory when first waking up, Bold and the Beautiful predictions say it comes back.

lt. Baker (Dan Martin) offered a hint of this happening. He said he’s seen it happen while questioning victims with memory loss. And… it sounds like it does for the Forrester daughter as well.

But she might not let on that she remembers. Bold and the Beautiful predictions have her keeping this quiet and for good reasons.

Sheila has already shot three of the Forrester women, Steffy, her mom, and her grandmother. And… look at the demented woman today.

She’s out walking around free and hovering around the Forresters as if she belongs there. She’s even fooled the widow’s mother Taylor Hayes (Krista Allen).

B&B predictions suggest that Steffy Forrester has plans to rid the trigger-happy lunatic of this earth once and for all. Turning her in should mean the criminal stays locked up for good.

But that’s not the case if she goes for an insanity plea on B&B. She could still walk one day. Or she could go to prison and escape. It looks like her latest shooting victim refuses to leave this to chance.

So, Steffy Forrester might plan to kill her before she can do any more harm. By pretending she still doesn’t remember, she can keep her mother-in-law at bay.

Bold and the Beautiful spoilers say Sheila panics next week and decides then to oust Steffy. Spoilers also say something stops her in her tracks.

Next, the spoilers put Steffy sharing a rare moment of sympathy with Finn’s birth mother. So, it looks as if the mom of two baits Sheila into thinking she doesn’t remember and starts to care about her.

This evil woman could think that she might end up with a place in her grandson’s life after all. This act of kindness might be fake coming from Steffy. But it could be the event that stops Sheila’s attempt to kill her daughter-in-law.

#5 Bold and the Beautiful Prediction: Preparing for the Kill?

Whether Steffy Forrester can carry this through or not, it looks like her plan could soon be in action. if B&B’s predictions ring true, she’s building her strength while in the hospital for what she has planned.

At the same time, she holds Sheila at bay with kindness next week on Bold and the Beautiful. This keeps Steffy alive as this certifiable woman sees a possible future with the Forresters.

When your husband’s ex-wife thinks she’s still his wife 😳 What would you do if you were Hope? #BoldandBeautiful pic.twitter.com/pXlbtMa8qq

As long as she keeps thinking Liam Spencer is her husband, it looks as if she can keep them fooled. Now that her Steffy seems a little more receptive to her, Sheila might let her guard down.

But when it comes time to play out this plan, Steffy Forrester will have to gather up the courage to do it. Or she could stop herself in her tracks and realize this makes her more like her mother-in-law, which is not what she wants.

Only time will tell on the CBS soap. Come back for all your Bold and the Beautiful spoilers here at Soap Dirt.