For a series of new posts on Instagram on Sunday, the actress slipped into a skimpy pink-patterned bikini and strutted around a boat and an outdoor patio.

She began by sharing a couple of photos of herself decked out in the colorful two-pice while sitting outside with some greenery and the gorgeous blue skies in the background.

‘Headwraps & Bikinis,’ she wrote in the caption, in a reference to both her outfit and the matching headwrap she donned over her dark tresses. 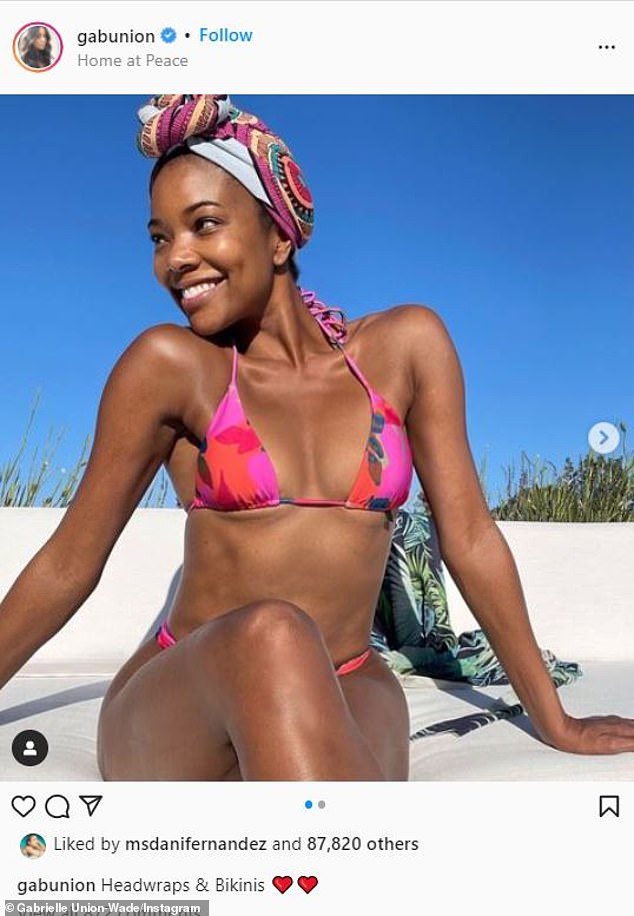 Rock solid: Gabrielle Union, 49, flaunted her fab figure in a pink-patterned bikini on Instagram, first in a post of two photos, and then again in the same two-piece in a video

The video begins with Union in the very same two-piece working the camera with an assortment of poses onboard a boat.

‘I can’t help it. I be doing the most and I’m Ok with that, Union wrote in the caption of the clip.

With a big smile on her face, she leans to her left white straw hat over her dark tresses.

Within seconds the Bring It On star can be seen looking straight into the camera, only this time she replaced the hat with a colorful headwrap that matched her bikini over her locks. 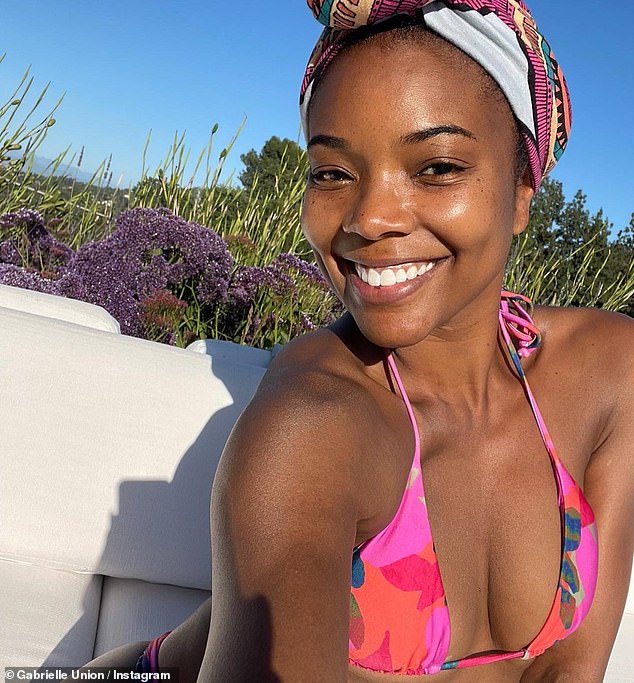 Glowing: The Bring It On alum also dropped a selfie snap in her initial post 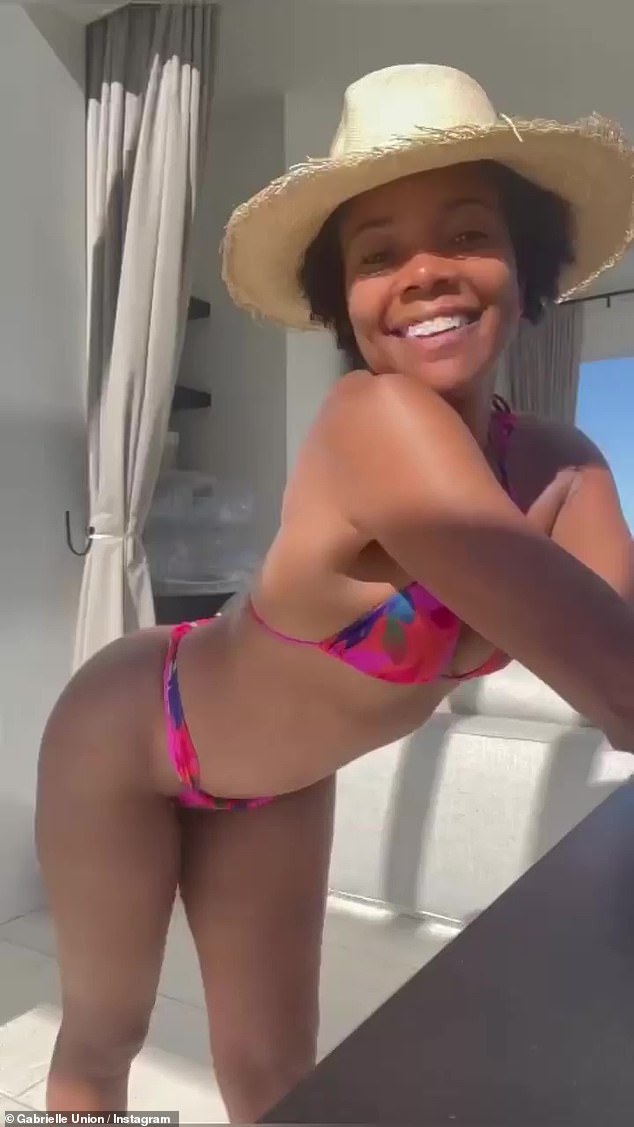 Working it: Union followed up with the video post that begins with her leaning to her left aboard a boat

Strike a pose: The actress did a couple of turns while showcasing her figure for her 20.1 million Instagram fans and followers

Feeling playful, the Nebraska native added a green plant-patterned body wrap over her ensemble and kicked into a dance of sorts while on an outdoor patio.

She jumps out of the frame of the camera within a few seconds, and then quickly returns in a selfie clip while walking along a hill.

Just as fast as she is seen strolling along the hilltop, Union returns back to the patio for another round of dancing until the end of the video. 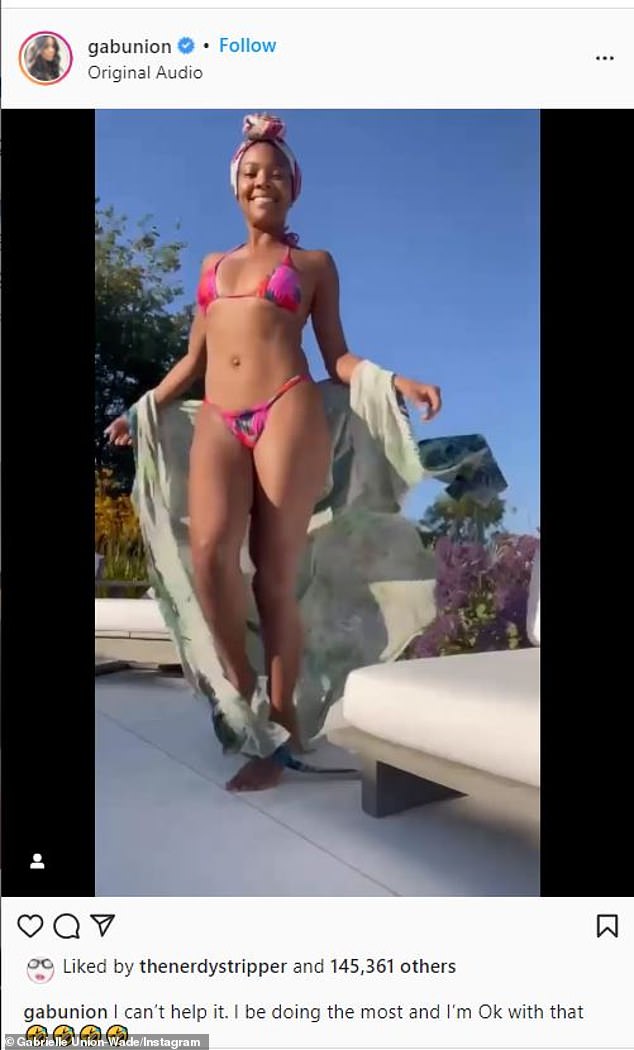 Flirty: The She’s All That star admitted she ‘can’t help it’ in the caption of the clip 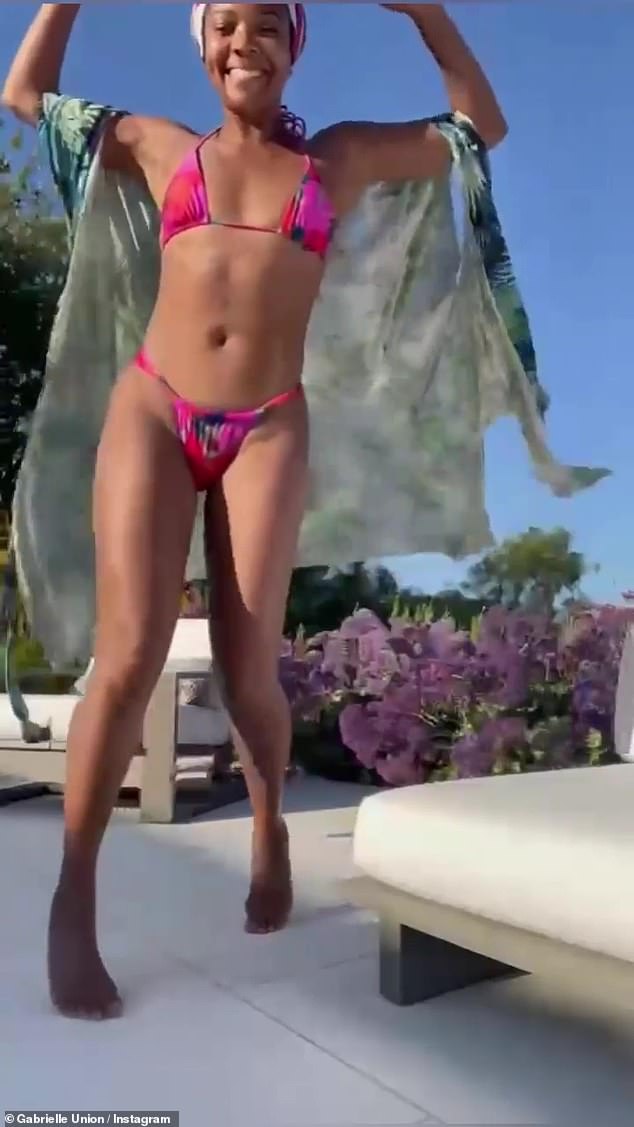 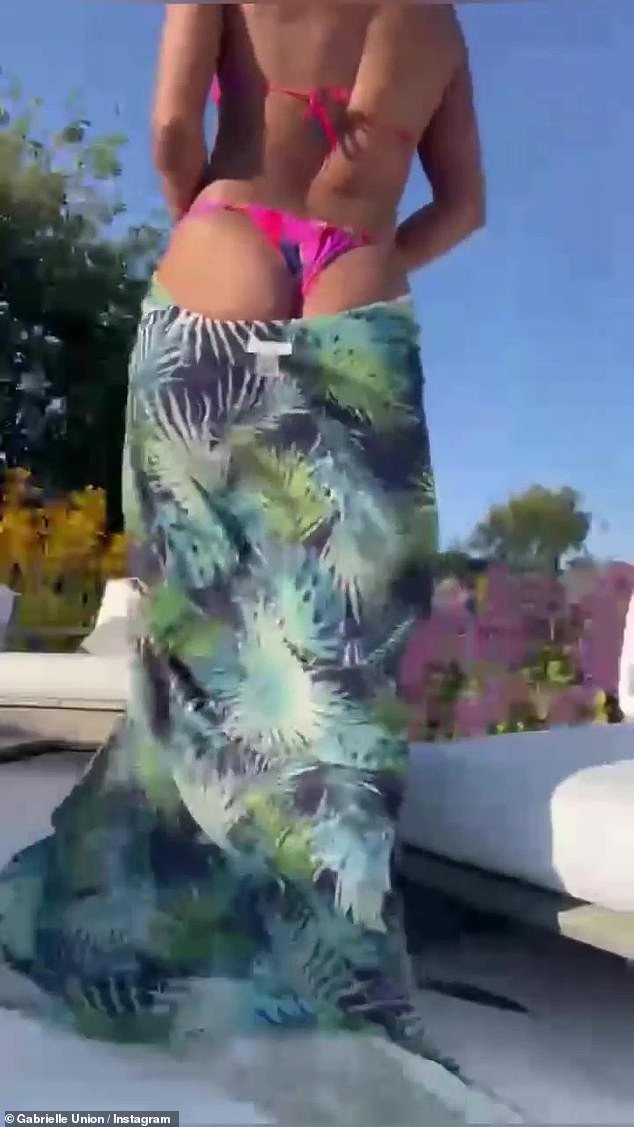 Baby got back: On more than one occasion the actress put her derriere front and center

Union and husband Dwyane Wade are also the proud parents to the retired basketball star’s daughter Zaya, 14, and two sons Xavier, eight, and Zaire, 20, both from two previous relationships, as well as their own daughter Kaavia, three.

The couple stared dating back in 2008 and eventually tied-the-knot in August of 2014 in Miami.

Most recently she starred in the family-comedy movie Cheaper By The Dozen, with Zach Braff and Erica Christensen, that dropped March 18.

Her upcoming romantic comedy movie The Perfect Find will likely be released on Netflix this summer. 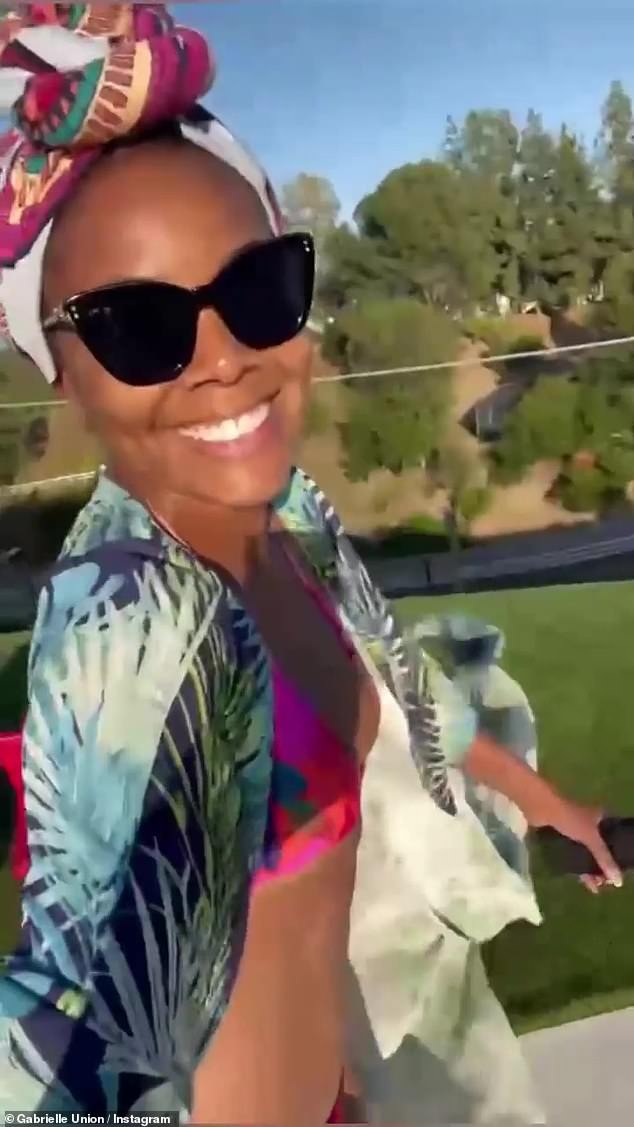 Soaking the sun: She jumps out of the frame of the patio shot, only to quickly returns= in a selfie clip while walking along a hill 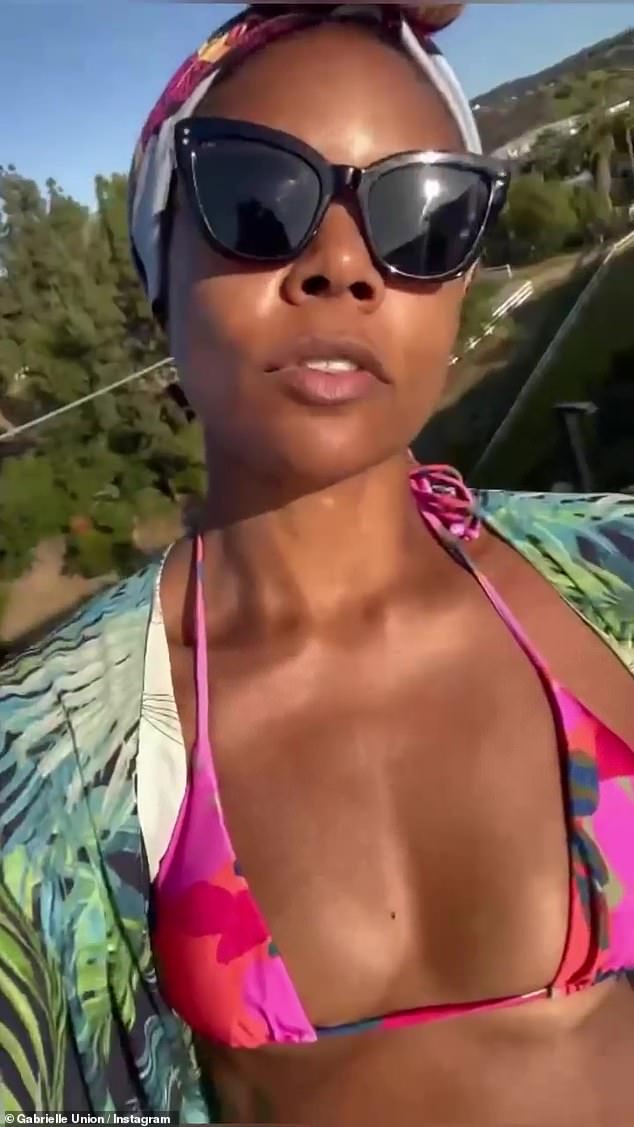 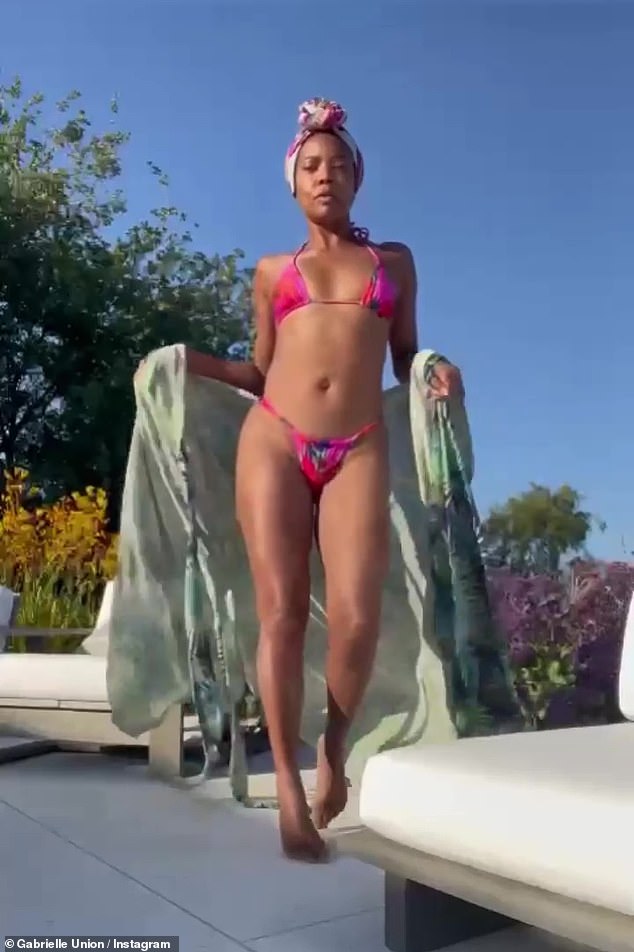 Just as fast as she is seen strolling along the hilltop, Union returns back to the patio for another round of dancing until the end of the video 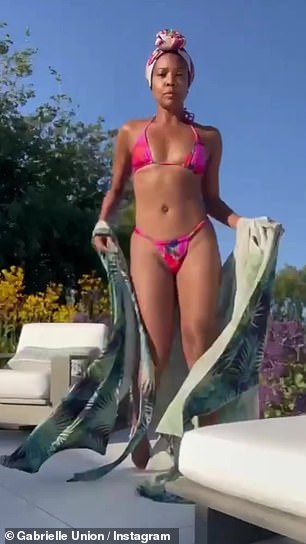 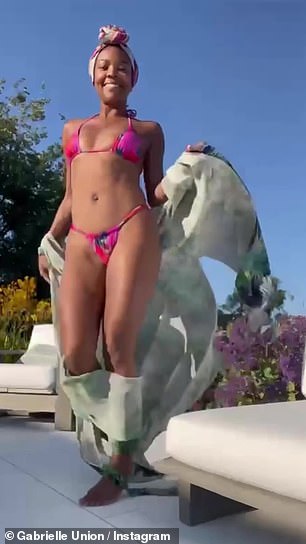 Movin’ to the groovin’: The wife of NBA legend Dwyane Wade returned for another round of dancing on the patio 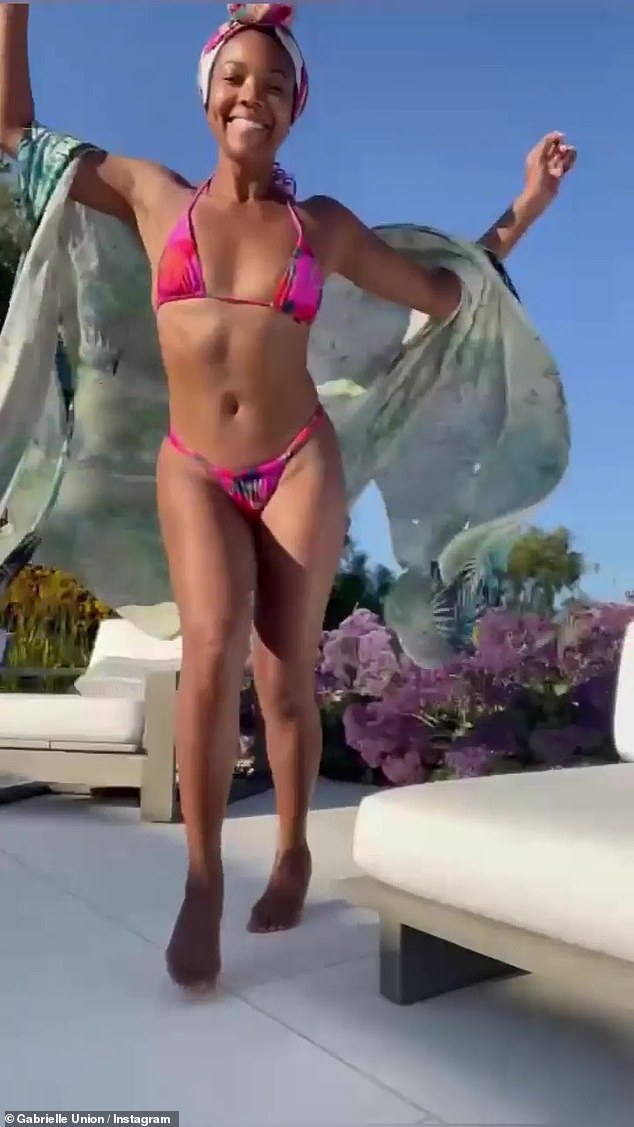 new role: Union has a new movie in the post-production phase: the romantic comedy movie The Perfect Find, which will likely be released on Netflix this summer