‘Welllppp I f**ked this one up’: Khloe Kardashian forced to ADMIT daughter True Thompson was Photoshopped into Disneyland photos less than a year after fan theory went viral

By Christine Rendon For Dailymail.com

Less than six months after a fan theory went viral, Khloe Kardashian was forced to admit her daughter True Thompson had been Photoshopped into 2021 Disneyland photos.

But the façade crumbled after Khloe revealed it was her daughter’s first time in Disneyland on Tuesday. 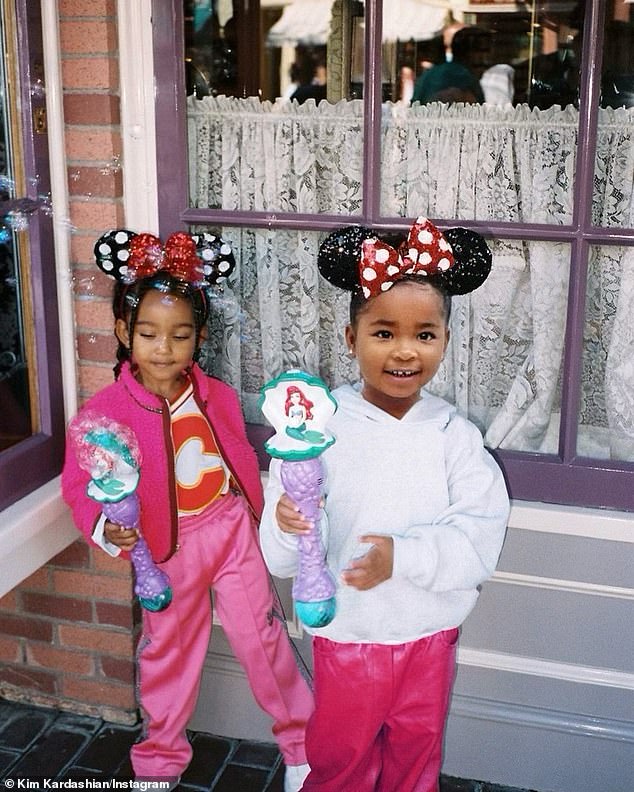 FAKE: Khloe Kardashian has been forced to admit True was PHOTOSHOPPED into this 2021 Disneyland photo with her cousin Chicago

When a fan called out Khloe and Kim, who had originally posted the photos, over the Photoshop, Khloe came clean and attempted to divert attention to her upcoming Hulu show.

‘Welllppp I f**ked this one up. Anyways….. let’s focus on something else (laughing crying emoji). Our show airs in a few days,’ she tweeted on Wednesday.

The truth came out after Khloe announced it was her daughter’s first time visiting the Happiest Place on Earth in videos posted to her Instagram Stories on Tuesday.

Last year TikToker maiachondrialmembrane theorized True had been Photoshopped over her cousin Stormi in a video that has garnered over 2 million ‘likes.’ 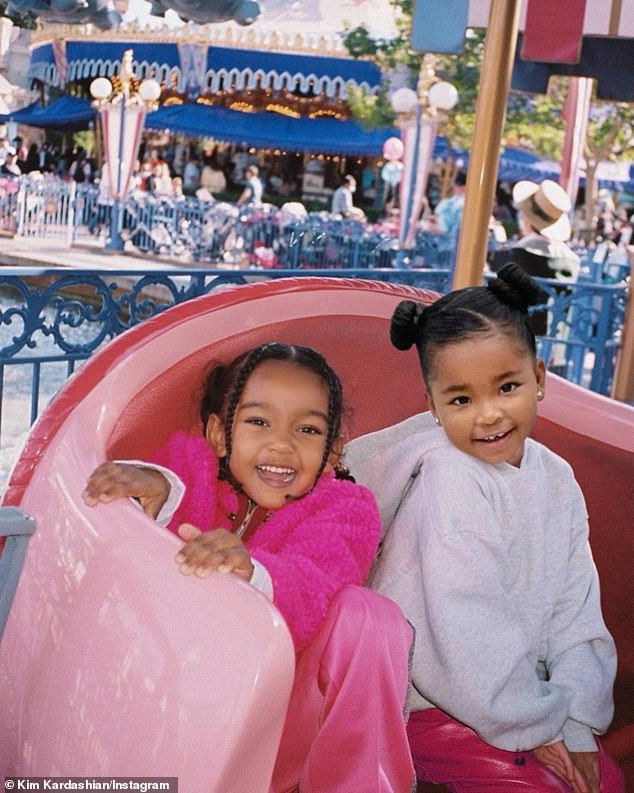 Not real: A Tik Toker theorized True had been Photoshopped over Stormi in a video last year 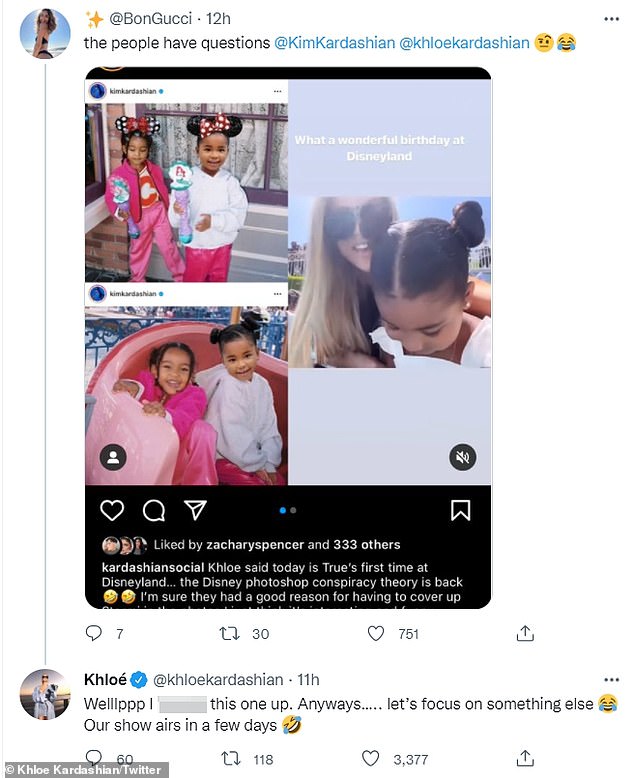 ‘I f**ked this one up’: Khloe copped to the editing after a fan took her to task over the images

The suggestion was that True had been edited into the images as the Kardashians did damage control over Travis Scott’s Astroworld tragedy, which had occurred just a month before the Photoshopped images were posted.

‘This lovely Instagram page revealed to me that I’m not crazy. True is Photoshopped,’ the TikToker said. ‘Not only is she Photoshopped, but she’s Photoshopped onto a photo of Stormi from October.

‘I was just so weirded out. ‘Cause I’m like, maybe Kylie didn’t want us to see Stormi but Kim really wanted us to see this photo of Chicago for some reason so she Photoshopped it?’

Not long after the Disneyland images were shared, Travis posted his first Instagram photo since the tragedy.

‘I was really confused. But you know, shortly thereafter, a couple hours later, Travis Scott makes his return to Instagram. And then it all sort of clicked, and I realized they’re as calculated as ever – allegedly,’ the TikToker said.

‘What it really makes me wonder how these conversations go, and do they not feel crazy when they’re like, “Okay, I’m going to post this, Photoshop it, distraction, Travis then you post, make it black and white , makes you look mournful. Kyle, you can comment, don’t say anything, people will criticize that, just put hearts.”‘ 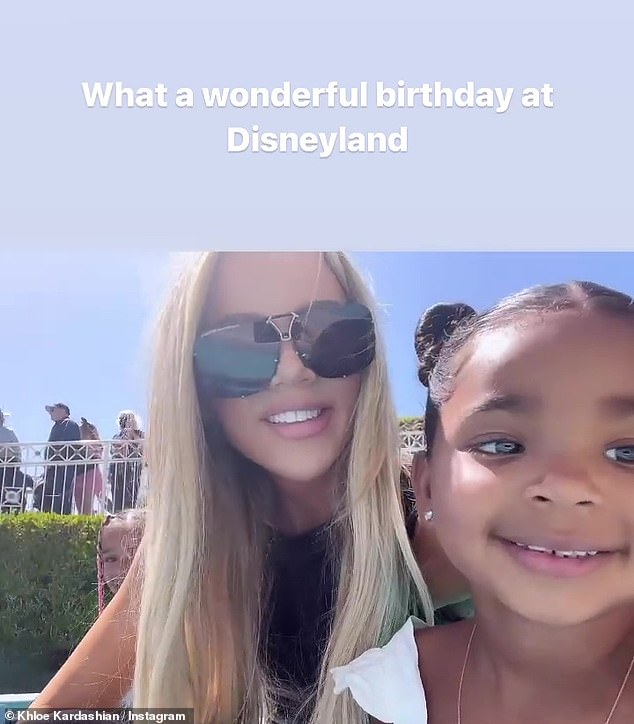 Uh-oh: The façade crumbled after Khloe revealed it was her daughter’s first time in Disneyland on Tuesday 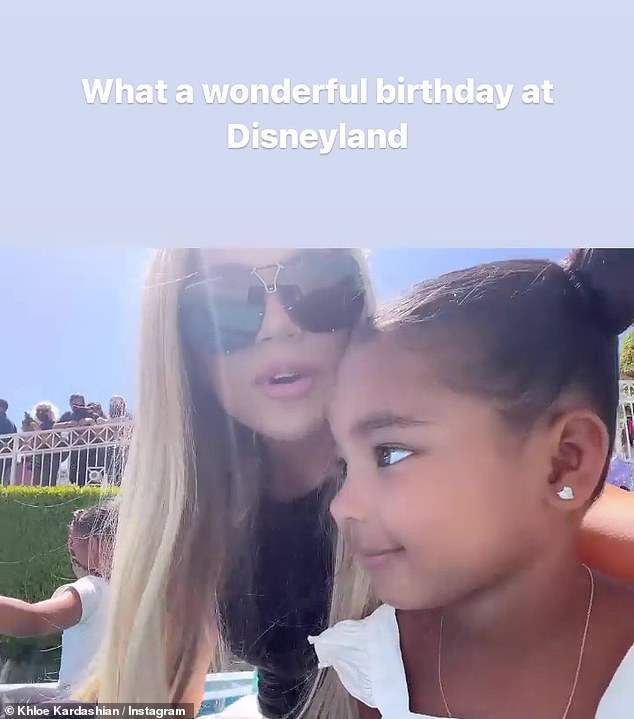 ‘This is True’s first time to Disneyland!’ Khloe gushed in video posted to her Instagram Stories on Tuesday, contradicting the images shared late last year