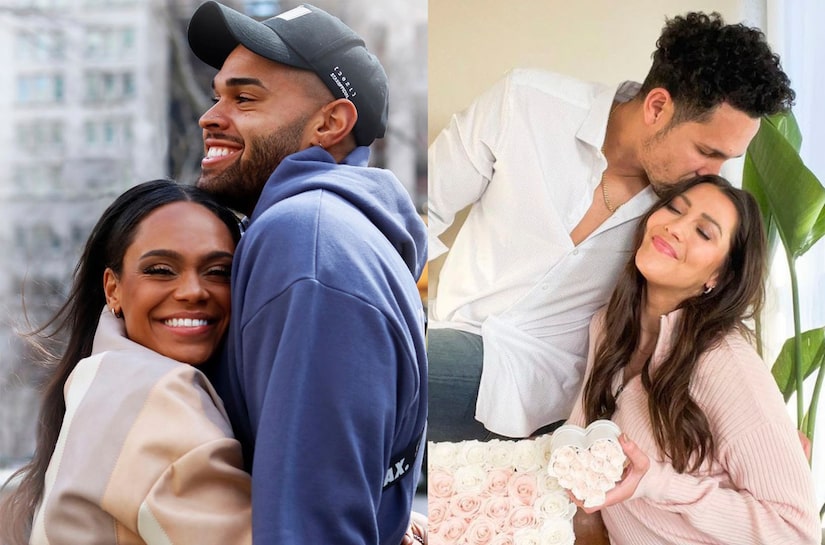 It’s a double date this week on “Bachelor Happy Hour”!

On this week’s episode of the “Bachelor Happy Hour” podcast, Michelle Young and Becca Kufrin’s men joined them for an incredible podcast.

Nayte Olukoya and Michelle got engaged on Season 18 of “The Bachelorette,” and Thomas Jacobs and Becca found love on the beaches of Season 7 of “Bachelor in Paradise.”

Now the two couples had a fun conversation where they discussed everything from their futures together to never-heard stories and more.

The Bachelor Nation couples even shared some baby names they are saving for the future when that time comes for them.

Nayte started off by saying, “Low-key, I’ve had a list of baby names since I was like 10 years old.”

Thomas asked if in Nayte’s Nigerian culture his first name Babatunde will stay in the family.

And so while Babatunde isn’t on the table right now, Nayte shared one of his other favorite names, saying, “I don’t really have a lot of girl names. I know that’s kind of messed up. I really like the name Ayodele for a boy though. My sister’s name is Ayowomi, so the male version of that is Ayodelé and I’ve always loved that name.”

Becca and Thomas shared some of their favorite names next, with Thomas saying, “We’ve talked about baby names. We love the names Sloan and Stevie for girls. The first girl’s name would be Stevie, Stevie Jill most likely.”

Becca chimed in, adding, “Her name would be Stevie after my late father. Stevie Kufrin-Jacobs or Stevie Jacobs-Kufrin. We’re still working on that part!”

And Thomas shared his favorite boy name, saying, “And for the first boy, I want John Gerald Jacobs. John is a great name.”

Unfortunately, Michelle isn’t on board with the name John, adding, “Sorry, Nayte, but I dated a Johnny, so nope!”

Thomas joked that their Johnny would be better than Michelle’s ex and Becca chimed in again, saying, “But I’m also hoping for all girls, sooo fingers crossed!”

To hear more of Michelle, Becca, Nayte, and Thomas’ conversation, check out the full episode of “Bachelor Happy Hour” below.

Waiting for your permission to load Spotify episode.